In the first article of this series on car model classification, we built a model using transfer learning to classify the car model through an image of a car. In the second article, we showed how TensorFlow Serving can be used to deploy a TensorFlow model using the car model classifier as an example. We dedicate this third post to another essential aspect of deep learning and machine learning in general: the explainability of model predictions.

We will start with a short general introduction on the topic of explainability in machine learning. Next, we will briefly talk about popular methods that can be used to explain and interpret predictions from CNNs. We will then explain Grad-CAM, a gradient-based method, in-depth by going through an implementation step by step. Finally, we will show you the results we obtained by our Grad-CAM implementation for the car model classifier.

A Brief Introduction to Explainability in Machine Learning

For the last couple of years, explainability was always a recurring but still niche topic in machine learning. But, over the past four years, interest in this topic has started to accelerate. At least one particular reason fuelled this development: the increased number of machine learning models in production. On the one hand, this leads to a growing number of end-users who need to understand how models are making decisions. On the other hand, an increasing number of machine learning developers need to understand why (or why not) a model is functioning in a particular way.

This increasing demand in explainability led to some, both methodological and technical, noteworthy innovations in the last years:

Deep neural networks and especially complex architectures like CNNs were long considered as pure black box models. As written above, this changed in recent years, and now there are various methods available to explain CNN outputs. For example, the excellent tf-explain library implements a wide range of useful methods for TensorFlow 2.x. We will now briefly talk about the ideas of different approaches before turning to Grad-CAM:

This is the most straightforward visualization technique. It simply shows the output of a specific layer within the network during the forward pass. It can be helpful to get a feel for the extracted features since, during training, most of the activations tend towards zero (when using the ReLu-activation). An example for the output of the first convolutional layer of the car model classifier is shown below: 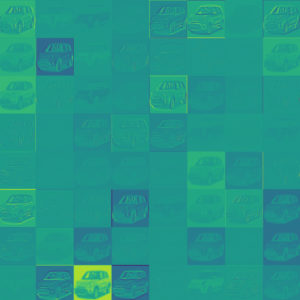 One can use the vanilla gradients of the predicted classes’ output for the input image to derive input pixel importances.

We can see that the highlighted region is mainly focused on the car. Compared to other methods discussed below, the discriminative region is much less confined.

This approach computes the importance of certain parts of the input image by reevaluating the model’s prediction with different parts of the input image hidden. Parts of the image are hidden iteratively by replacing them by grey pixels. The weaker the prediction gets with a part of the image hidden, the more important this part is for the final prediction. Based on the discriminative power of the regions of the image, a heatmap can be constructed and plotted. Applying occlusion sensitivity for our car model classifier did not yield any meaningful results. Thus, we show tf-explain‘s sample image, showing the result of applying the occlusion sensitivity procedure for a cat image. 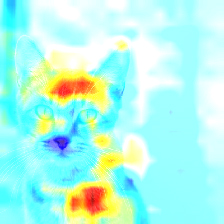 Another exciting approach called CNN Fixations was introduced in this paper. The idea is to backtrack which neurons were significant in each layer, given the activations from the forward pass and the network weights. The neurons with large influence are referred to as fixations. This approach thus allows finding the essential regions for obtaining the result without the need for any recomputation (e.g., in the case of occlusion sensitivity above, where multiple predictions must be made).

The procedure can be described as follows: The node corresponding to the class is chosen as the fixation in the output layer. Then, the fixations for the previous layer are computed by computing which of the nodes have the most impact on the next higher level’s fixations determined in the last step. The node importance is computed by multiplying activations and weights. If you are interested in the details of the procedure, check out the paper or the corresponding github repo. This backtracking is done until the input image is reached, yielding a set of pixels with considerable discriminative power. An example from the paper is shown below.

Introduced in this paper, class activation mapping (CAM) is a procedure to find the discriminative region(s) for a CNN prediction by computing class activation maps. A significant drawback of this procedure is that it requires the network to use global average pooling (GAP) as the last step before the prediction layer. It thus is not possible to apply this approach to general CNNs. An example is shown in the figure below (taken from the CAM paper):

The class activation map assigns importance to every position (x, y) in the last convolutional layer by computing the linear combination of the activations, weighted by the corresponding output weights for the observed class (Australian terrier in the example above). The resulting class activation mapping is then upsampled to the size of the input image. This is depicted by the heat map above. Due to the architecture of CNNs, the activation, e.g., in the top left for any layer, is directly related to the top left of the input image. This is why we can conclude which input regions are important by only looking at the last CNN layer.

The Grad-CAM procedure we will discuss in detail below is a generalization of CAM. Grad-CAM can be applied to networks with general CNN architectures, containing multiple fully connected layers at the output.

Grad-CAM extends the applicability of the CAM procedure by incorporating gradient information. Specifically, the gradient of the loss w.r.t. the last convolutional layer determines the weight for each of its feature maps. As in the CAM procedure above, the further steps are to compute the weighted sum of the activations and then upsampling the result to the image size to plot the original image with the obtained heatmap. We will now show and discuss the code that can be used to run Grad-CAM. The complete code is available here on GitHub.

We now use the Grad-CAM implementation to interpret and explain the predictions of the TransferModelfor car model classification. We start by looking at car images taken from the front.

Grad-CAM for car images from the front

The red regions highlight the most important discriminative regions, the blue regions the least important. We can see that for images from the front, the CNN focuses on the car’s grille and the area containing the logo. If the car is slightly tilted, the focus is shifted more to the edge of the vehicle. This is also the case for slightly tilted images from the car’s backs, as shown in the middle image below.

Grad-CAM for car images from the back

Grad-CAM for car images from the side

When looking at images from the side, we notice the discriminative region is restricted to the bottom half of the cars. Again, the angle the car image was taken from determines the shift of the region towards the front or back corner.

In general, the most important fact is that the discriminative areas are always confined to parts of the cars. There are no images where the background has high discriminative power. Looking at the heatmaps and the associated discriminative regions can be used as a sanity check for CNN models.

We discussed multiple approaches to explaining CNN classifier outputs. We introduced Grad-CAM in detail by examining the code and looking at examples for the car model classifier. Most notably, the discriminative regions highlighted by the Grad-CAM procedure are always focussed on the car and never on the backgrounds of the images. The result shows that the model works as we expect and uses specific parts of the car to discriminate between different models.

In the fourth and last part of this blog series, we will show how the car classifier can be built into a web application using Dash. See you soon!