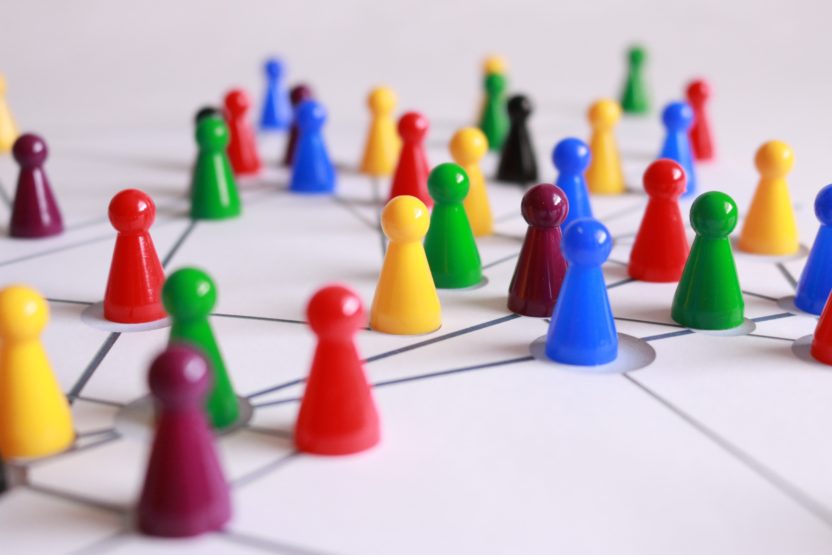 „There is no way you know Thomas! What a coincidence! He’s my best friend’s saxophone teacher! This cannot be true. Here we are, at the other end of the world and we meet? What are the odds?“ Surely, not only us here at STATWORX have experienced similar situations, be it in a hotel’s lobby, on the far away hiking trail or in the pub in that city you are completely new to. However, the very fact that this story is so suspiciously relatable might indicate that the chances of being socially connected to a stranger by a short chain of friends of friends isn’t too low after all.

Lots of research has been done in this field, one particular popular result being the 6-Handshake-Rule. It states that most people living on this planet are connected by a chain of six handshakes or less. In the general setting of graphs, in which edges connect nodes, this is often referred to as the so-called small-world-effect. That is to say, the typical number of edges needed to get from node A to node B grows logarithmically in population size (i.e., # nodes). Note that, up until now, no geographic distance has been included in our consideration, which seems inadequate as it plays a significant role in social networks.

A model that explains these observations

Clearly, due to the characteristics of social networks mentioned above, only a model that includes geographic distances of the individuals makes sense. Also, to account for the occurrence of hubs, research has shown that reasonable models attach a random weight to each node (which can be regarded as the social attractiveness of the respective individual). A model that accounts for all three properties is the following: First, randomly place nodes in space with a certain intensity

, which can be done with a Poisson process. Then, with an independent uniformly distributed weight

attached to each node

, every two nodes get connected by an edge with a probability

is the dimension of the model (here:

as we’ll simulate the model on the plane), model parameter

controls the impact of the weights, model parameter

squishes the overall input to the profile function

, which is a monotonously decreasing, normalized function that returns a value between

That is, of course, what we want because its output shall be a probability. Take a moment to go through the effects of different

yields a smaller input value for

and thereby a higher connection probability. Similarly, a high

) and thus a higher connection probability. All this comprises a scale-free random connection model, which can be seen as a generalization of the model by Deprez and Würthrich. So much about the theory. Now that we have a model, we can use this to generate synthetic data that should look similar to real-world data. So let’s simulate!

From here on, the simulation is pretty straight forward. Don’t worry about specific numbers at this point.

What we need next is some information on which nodes are connected. That means, we need to first get the connection probability by evaluating

for each pair of nodes and then flipping a biased coin, accordingly. This yields a

means that the two respective nodes are connected and

that they’re not. We can gather all the information for all pairs in a matrix that is commonly known as the adjacency matrix.

In an earlier post we praised visNetwork as our go-to package for beautiful interactive graph visualization in R. While this remains true, we also have lots of love for tidyverse, and ggraph (spoken „g-giraffe“) as an extension of ggplot2 proves to be a comfortable alternative for non-interactive graph plots, especially when you’re already familiar with the grammar of graphics. In combination with tidygraph, which lets us describe a graph as two tidy data frames (one for the nodes and one for the edges), we obtain a full-fledged tidyverse experience. Note that tidygraph is based on a graph manipulation library called igraph from which it inherits all functionality and „exposes it in a tidy manner“. So before we get cracking with the visualization in ggraph, let’s first tidy up our data with tidygraph!

Let’s attach some new columns to the node dataframe which will be useful for visualization. After we created the tidygraph object, this can be done in the usual dplyr fashion after using activate(nodes)and activate(edges)for accessing the respective dataframes.

Tidygraph supports most of igraphs methods, either directly or in the form of wrappers. This also applies to most of the functions used above. For example breadth-first search is implemented as the bfs_* family, wrapping igraph::bfs(), the group_graphfamily wraps igraphs clustering functions and local_ave_degree() wraps igraph::knn().

GGraph is essentially built around three components: Nodes, Edges and Layouts. Nodes that are connected by edges compose a graph which can be created as an igraph object. Visualizing the igraph object can be done in numerous ways: Remember that nodes usually are not endowed with any coordinates. Therefore, arranging them in space can be done pretty much arbitrarily. In fact, there’s a specific research branch called graph drawing that deals with finding a good layout for a graph for a given purpose.

Usually, the main criteria of a good layout are aesthetics (which is often interchangeable with clearness) and capturing specific graph properties. For example, a layout may force the nodes to form a circle, a star, two parallel lines, or a tree (if the graph’s data allows for it). Other times you might want to have a layout with a minimal number of intersecting edges. Fortunately, in ggraph all the layouts from igraph can be used.

We start with a basic plot by passing the data and the layout to ggraph(), similar to what you would do with ggplot() in ggplot2. We can then add layers to the plot. Nodes can be created by using geom_node_point()and edges by using geom_edge_link(). From then on, it’s full-on ggplot2-style.

To see more clearly what nodes are essential to the network, the degree, which is the number of edges a node is connected with, was highlighted for each node. Another way of getting a good overview of the graph is to show a visual decomposition of the components. Nothing easier than that!

Wouldn’t it be interesting to visualize the reach of a hub node? Let’s do it with a facet plot:

At this point, there are many graph properties (including the three above but also cluster sizes and graph distances) that are worth taking a closer look at, but this is beyond the scope of this blogpost. However, let’s look at one last thing. Somebody just recently told me about a very curious fact about social networks that seems paradoxical at first: Your average friend on Facebook (or Instagram) has way more friends than the average user of that platform.

It sounds odd, but if you think about it for a second, it is not too surprising. Sampling from the pool of your friends is very different from sampling from all users on the platform (entirely at random). It’s exactly those very prominent people who have a much higher probability of being among your friends. Hence, when calculating the two averages, we receive very different results.

As can be seen, the model also reflects that property: In the small excerpt of the graph that we simulate, the average node has a degree of around 5 (blue intercept). The degree of connected nodes is over 10 on average (red intercept).

In the first part, I introduced a model that describes the features of real-life data of social networks well. In the second part, we obtained artificial data from that model and used it to create an igraph object (by means of the adjacency matrix). The latter can then be transformed into a tidygraph object, allowing us to easily make manipulation on the node and edge tibble to calculate any graph statistic (e.g., the degree) we like. Further, the tidygraph object is then used for conveniently visualizing the network through Ggraph.

I hope that this post has sparked your interest in network modeling and has given you an idea of how seamlessly graph manipulation and visualization with Tidygraph and Ggraph merge into the usual tidyverse workflow. Have a wonderful day! 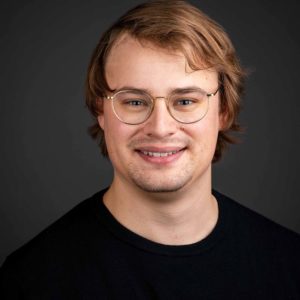 As a data scientist at STATWORX I am always keen on finding relevant structure in data. Also, I'm passionate about the mathematical fundament of machine learning algorithms.